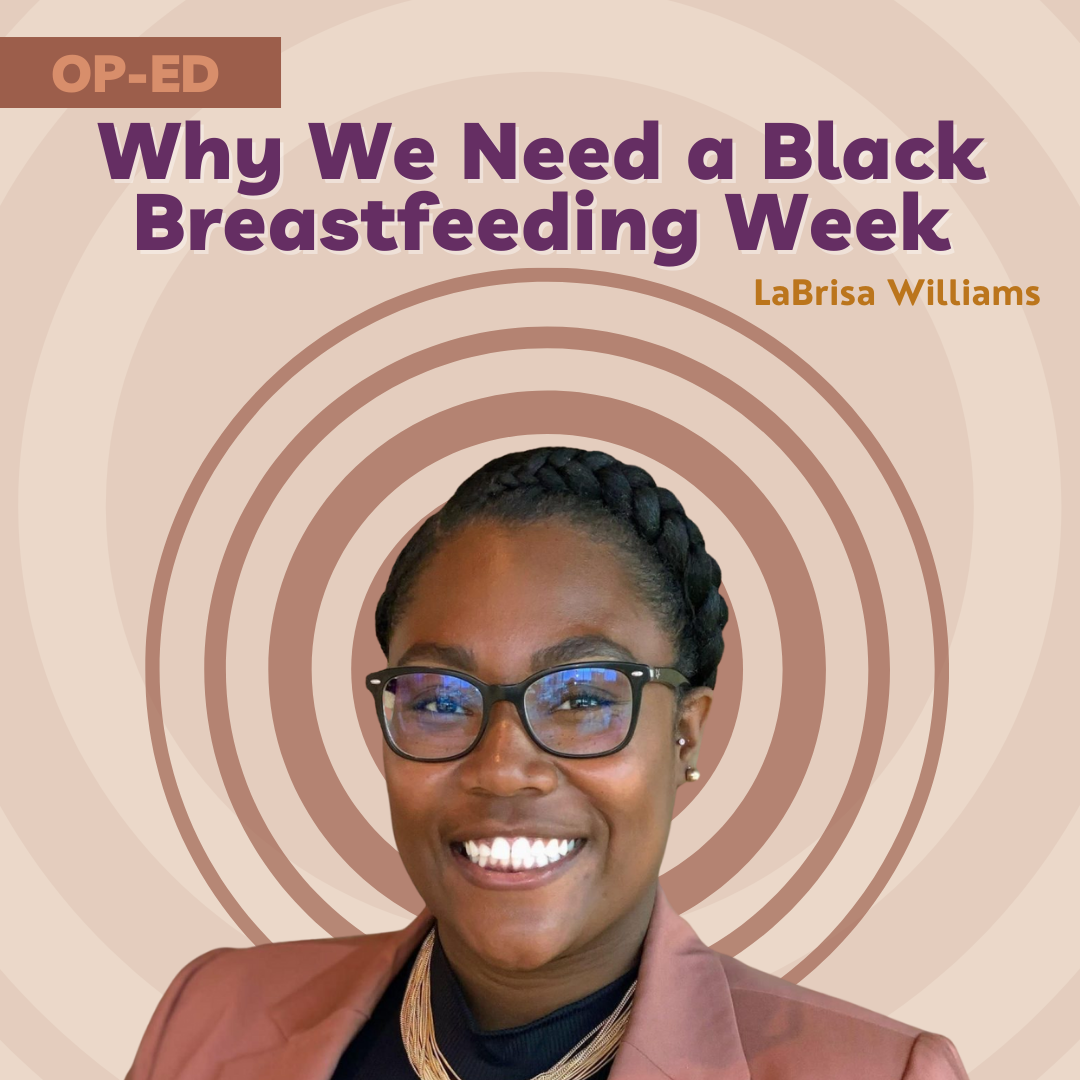 Let me answer that question with one word: history. As a Tulsa, Oklahoma native, I’ve spent the months since the 100th anniversary of my hometown’s race massacre considering how tragedies in our past shape our present when it comes to healthcare in America.

Some of my work as Executive Director of the Tulsa Birth Equity Initiative focuses on helping communities understand our history and how we got to this place in our healthcare journey. It’s my job to increase access to Birth Workers of color as a way to address health inequities in Tulsa and build healthier families.

Black Breastfeeding Week organizers highlight that 75% of white women have breastfed versus only 58.9% of Black women, with a lack of diversity in the lactation field identified as a key part of the issue. Sadly, health disparities we see today are the result of decades of Black loss and missed opportunities for justice.

For many women, much of the first practical advice they receive around breastfeeding comes in a healthcare setting, at a clinic, or in the hospital shortly after delivery. Though advice and guidance from trusted family and friends is crucial, any problems or deficits are usually diagnosed by a doctor, midwife, or nurse.

For Black women, the chances that this medical practitioner will be a person of color are slim. As of 2019, only 2.6% of the nation’s doctors identified as Black or African-American, and in 2020 these groups accounted for a mere 7.3% of students enrolled in medical school.

But do you know why these numbers are so low? Some might conclude that Black Americans can’t cut it in higher education, or they simply don’t choose to study medicine at the same rate. History tells a different story.

For example, have you ever heard of The Flexner Report? Also referred to as “Medical Education in the United States and Canada,” it was published in 1910 by American educator Abraham Flexner, with backing from the Carnegie Foundation. The Flexner Report has been credited for transforming and standardizing medical education. It called for significant improvements to medical education, higher admission standards, adherence to scientific methods in research and practice, and oversight by state licensure boards.

However, while it may have helped standardize medical care, The Flexner Report exacted a steep cost for medical schools without the funds to implement the changes.

Five of seven medical schools committed to educating Black physicians closed as a result of The Flexner report. A study published in August 2020 estimated that if those five schools had remained open, an additional 35,315 Black physicians would have entered the workforce in the years that followed, producing a 29% increase in the number of graduating African-American physicians in 2019 alone.

In addition, the medical schools that remained opened were unlikely to admit Black students due to Flexner’s beliefs about Black people and their role in medical education. In November of 2020, The Association of American Medical Colleges renamed their prestigious Abraham Flexner award due to his racist and sexist ideologies. In Chapter 14 of The Flexner Report, titled “The Medical Education of the Negro,” Flexner states that Black people should be trained in sanitation because he believed, “A well-taught negro sanitarian will be immensely useful; an essentially untrained negro wearing an M.D. degree is dangerous,” Flexner wrote.

Where did this lead? A report published in June 2020 by the Association of American Medical Colleges predicts a worsened doctor shortage of between 54,100 and 193,000 by 2033.

This all equals bad outcomes for Black patients. We know that a diverse workforce, training, and cultural competence are essential aspects of quality healthcare. Studies confirm that communities of color benefit from being seen by doctors of color.

The foundation of the U.S. Medical system was never intended to address our needs, support our families, repair our wounds and nurture our children. In other words, the system works beautifully for the people it was designed to support, and everybody else is on their own. Many people will overlook the role Abraham Flexner played in shaping the trajectory of the physician workforce, but if we continually fail to examine these lessons, we will struggle to move forward.

To solve a problem, we have to understand it. The Flexner Report may not be as violent as many of the historic crimes committed against Black people. Yet, its implications are still being felt today in ways both obvious and subtle, from the shortage of Black doctors to the appalling Black maternal mortality rate.

As we consider the solutions, it will take reflection and discomfort if we want to get at the nuances of the inequities we see today. So, yes, we need a Black Breastfeeding Week and so much more.

This op-ed was written by LaBrisa Williams, the Executive Director of the Tulsa Birth Equity Initiative, a HealthConnect One community-based doula replication site. LaBrisa is a 2021 Aspen Institute Healthy Communities Fellow. This article was originally published in The Black Wall Street Times.

Join the HealthConnect One Team! Visit our job opportunities page for more details.

We are looking for people with passion/and or experience working on birth/reproductive justice or issues related to racial justice.